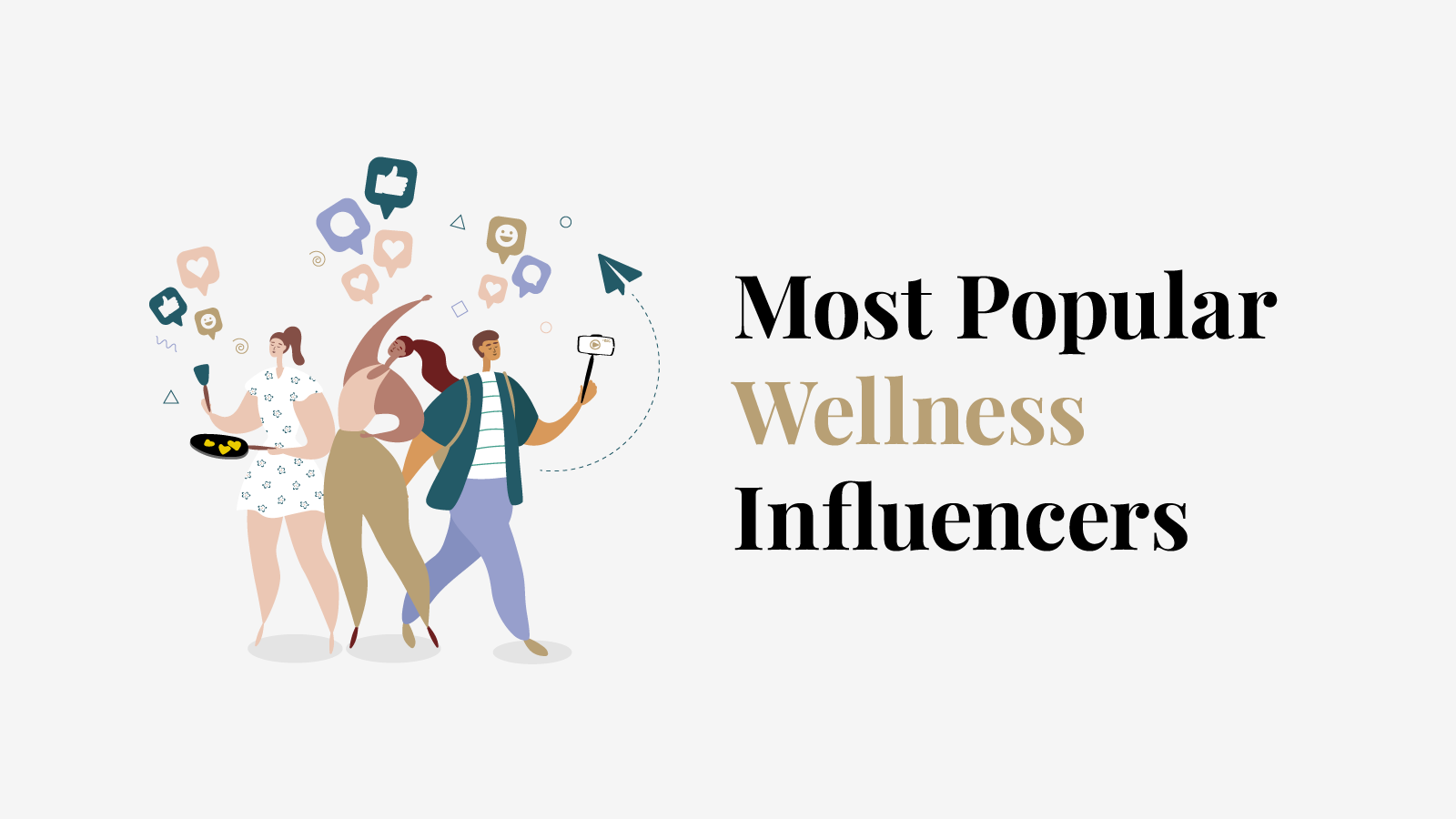 Influencers using social media to promote products and lifestyles are fast becoming the new alternative to traditional advertising. Word of mouth remains one of the most powerful tools, with people being more likely to react to a review from a friend or person they look up to. Subsequently, turning to Instagram for tips and tricks from influencers is becoming increasingly popular. But who are the key influencers aiming to help others in the wellness sphere?
Approximately, 39% of accounts on Instagram with over 15,000 followers are considered to be influencers. These accounts cater to a huge variety of lifestyles, choices and habits, forming online communities. Champney’s have analysed both up and coming and well established influencers in wellbeing categories such as health and fitness and nutrition to find out who is leading the way. Find out below which influencers are empowering their followers to love their bodies, look after their minds and live the best lives they can.

With many people looking to improve their health and wellbeing, it's no surprise that wellness influencers are being searched for. We have ranked wellness influencers based on average monthly Google searches to discover who is currently being looked for most frequently. 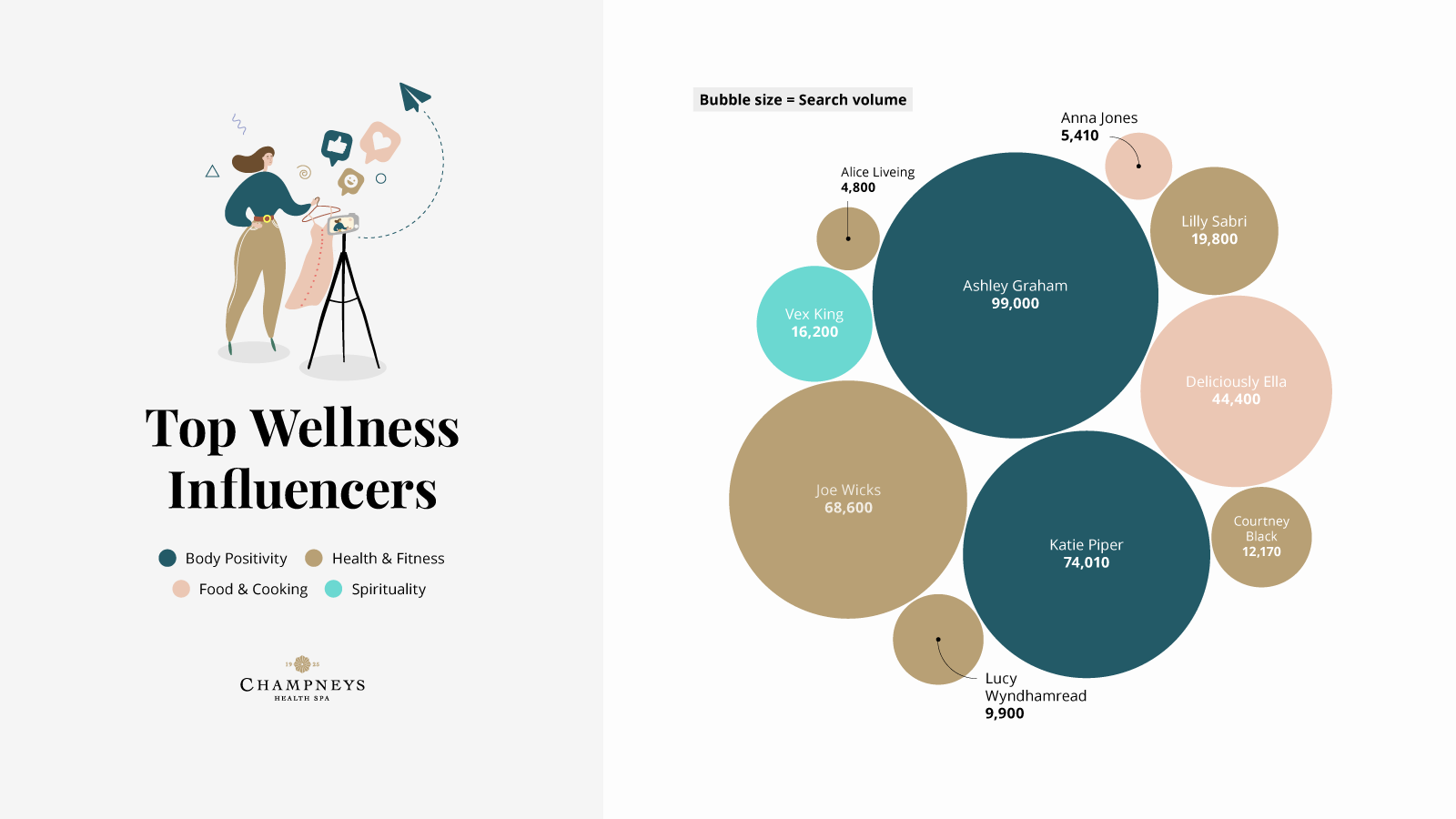 When looking at the top 10 influencers in wellness, 50% of these fall into the Health and Fitness category showing the increased demand around staying fit and healthy.  Interestingly, the two influencers seeing the largest search volume, Ashley Graham and Katie Piper, both fall within the body positivity category. Following these mood-boosting influencers is encouraging people to move away from negative social media feeds and embrace positive energy. 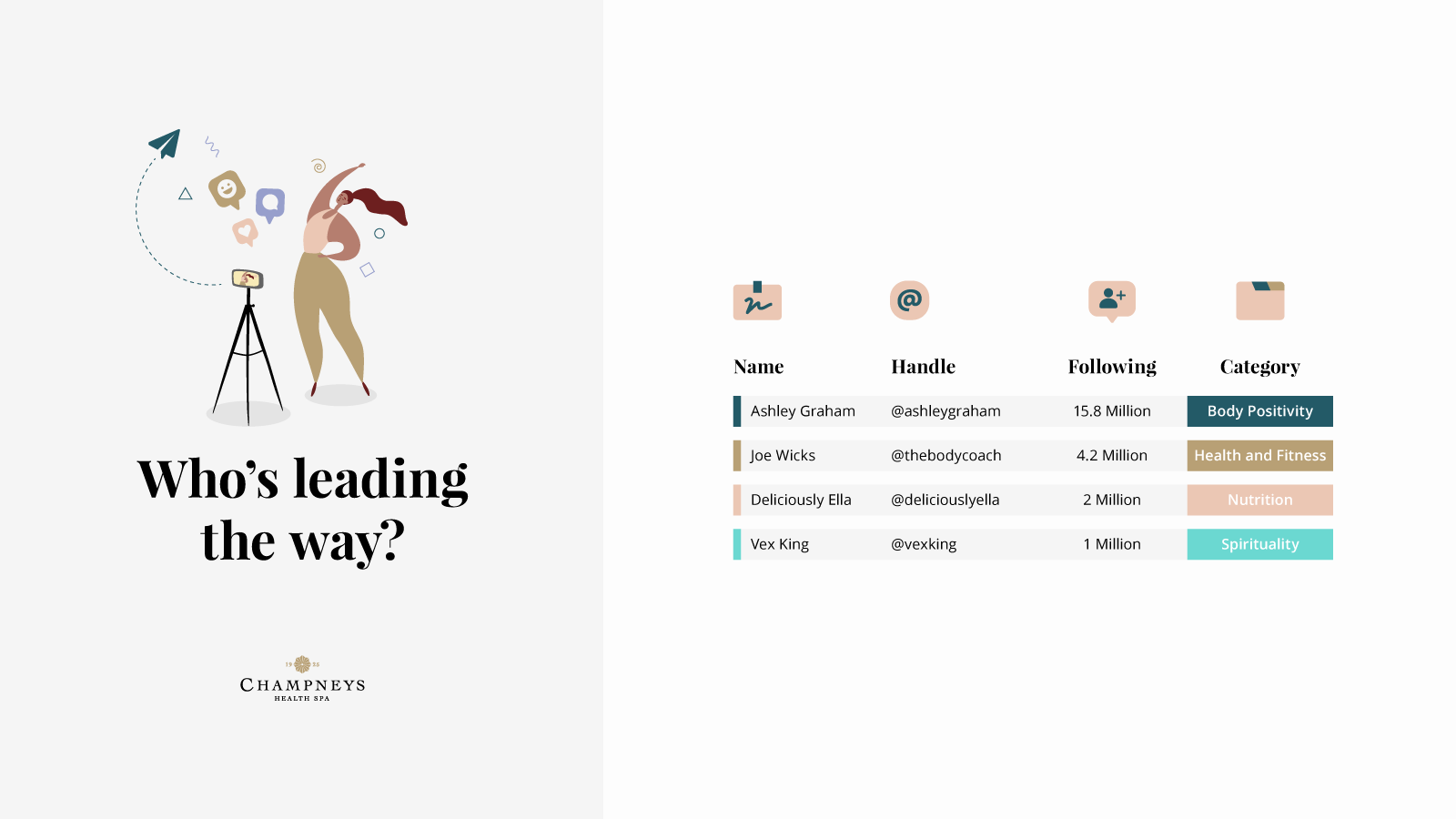 The top influencers for each category can be seen on the chart above. We have taken these key influencers in the wellness industry and reviewed what it is about them making such a difference and encouraging people to embrace wellness in their everyday lives. 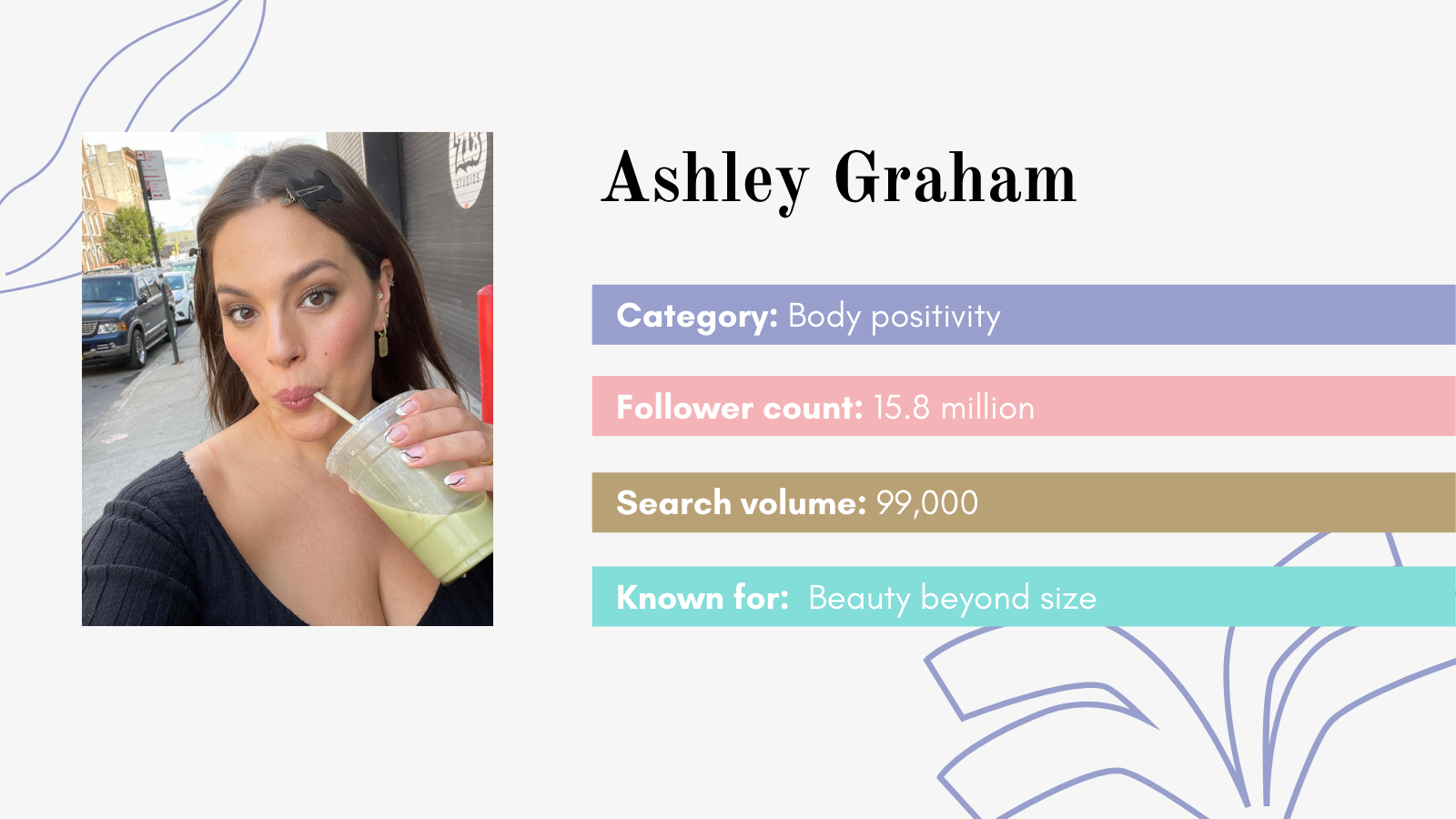 Ranking highest amongst the body positivity category is model Ashley Graham with 15.8 million followers.
Who is Ashley Graham? Ashley Graham is a model that advocates for the body positivity movement. In 2016, Ashley was the first plus size model to appear on the cover for Sports Illustrated. More recently Ashley has started a family and now has three sons. Her most recent additions being twin boys who were born in January this year.

Why we love Ashley: Ashley coined the term ‘beauty beyond size’ that became a hit on social media with over 740k uses of #beautybeyondsize on Instagram - we couldn't agree with her more! 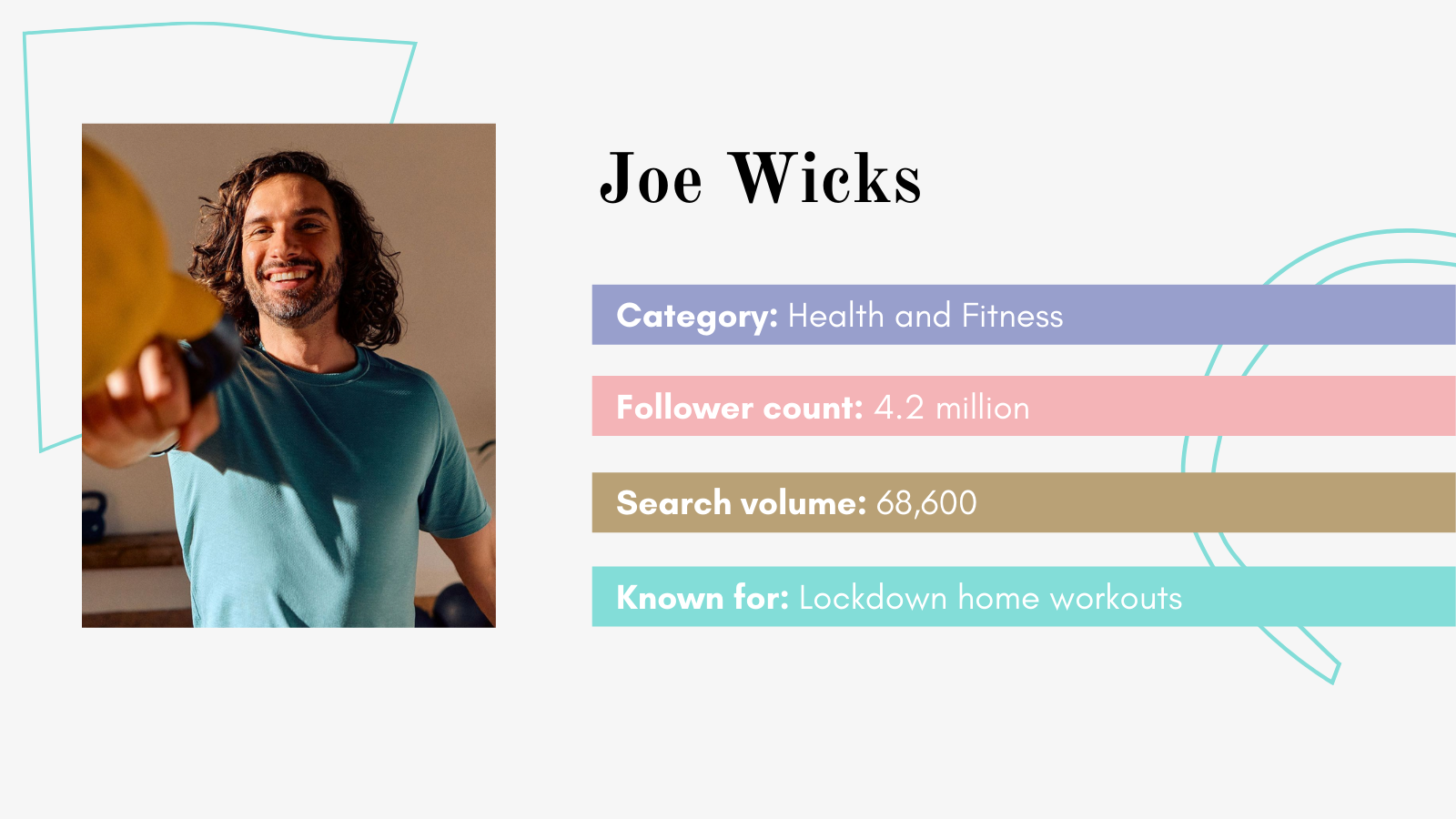 Lockdown’s very own personal trainer Joe Wicks is the leading health and fitness influencer with 4.2 million followers.
Who is Joe Wicks? Joe Wicks has made a name for himself as the ‘lockdown PT’, with his home fitness streams being watched by the masses. In fact, Joe’s second lockdown Livestream, in March 2020, was watched by over 950,000 viewers - he was even awarded the Guinness World Record title for “most viewers for a fitness workout live stream on YouTube''. Joe was also awarded an MBE for his efforts to keep the nation healthy and fit in 2020.

Why we love Joe: Joe shares his fitness journey, recipe ideas and family pictures - that's a combo we can't resist. We also love anyone who can rock a man bun! 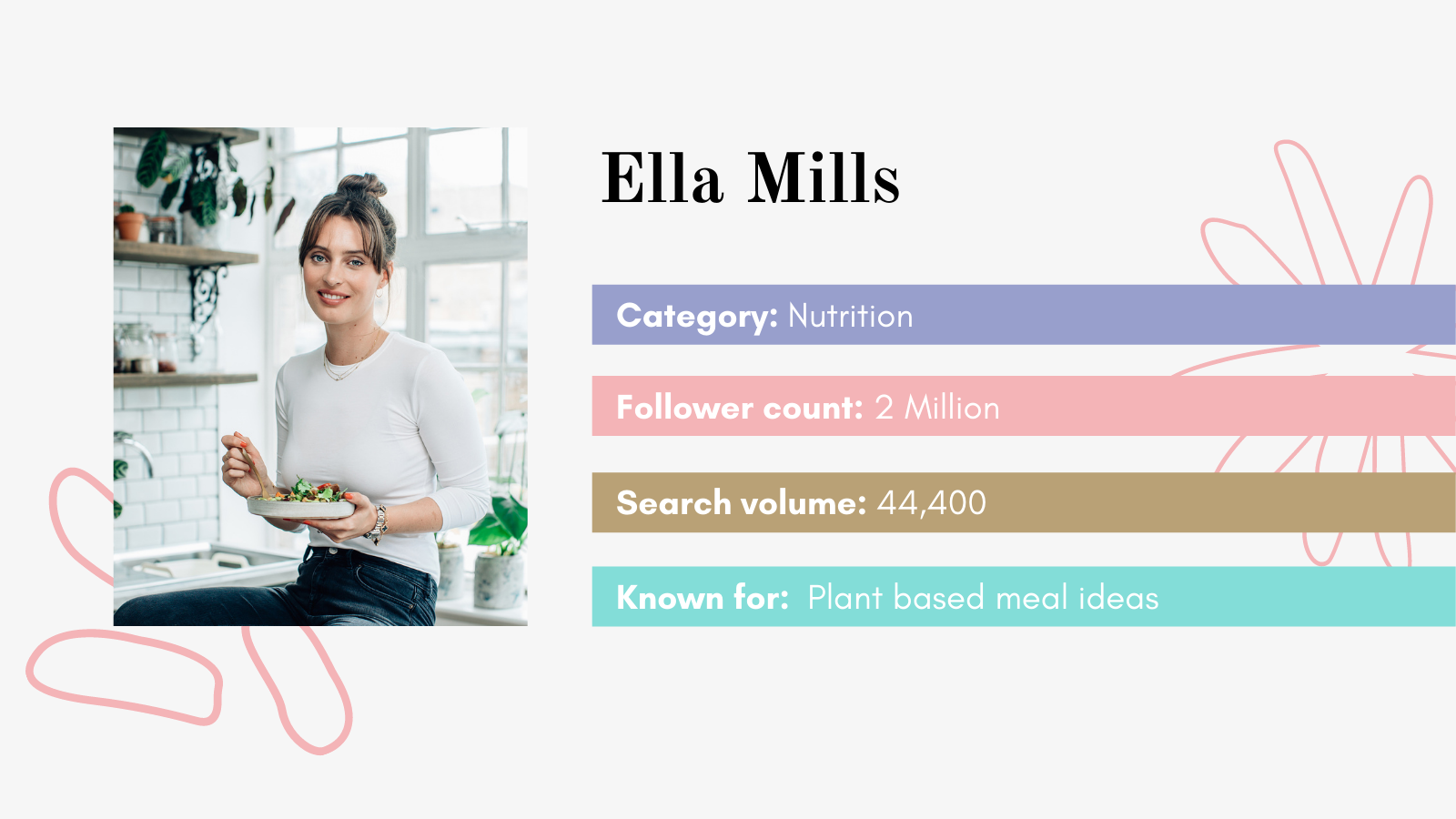 Nutrition's top influencer Ella Mills, also known as Deliciously Ella, has a following of 2 million.
Who is Ella Mills? Ella Mills, who goes by Deliciously Ella on social media, is a blogger/influencer who specialises in 100% plant-based, 100% natural food. After being diagnosed with Postural tachycardia syndrome (PoTS), Ella wanted to use her diet to improve her symptoms and overall health. Building her own clean eating empire, Ella has cookbooks, podcasts, her own line of food products and even a restaurant.

Why we love Ella: Her Instagram is filled with mouth-watering food shots that we could scroll through for hours (and thankfully, also the recipes to recreate the food yourself). 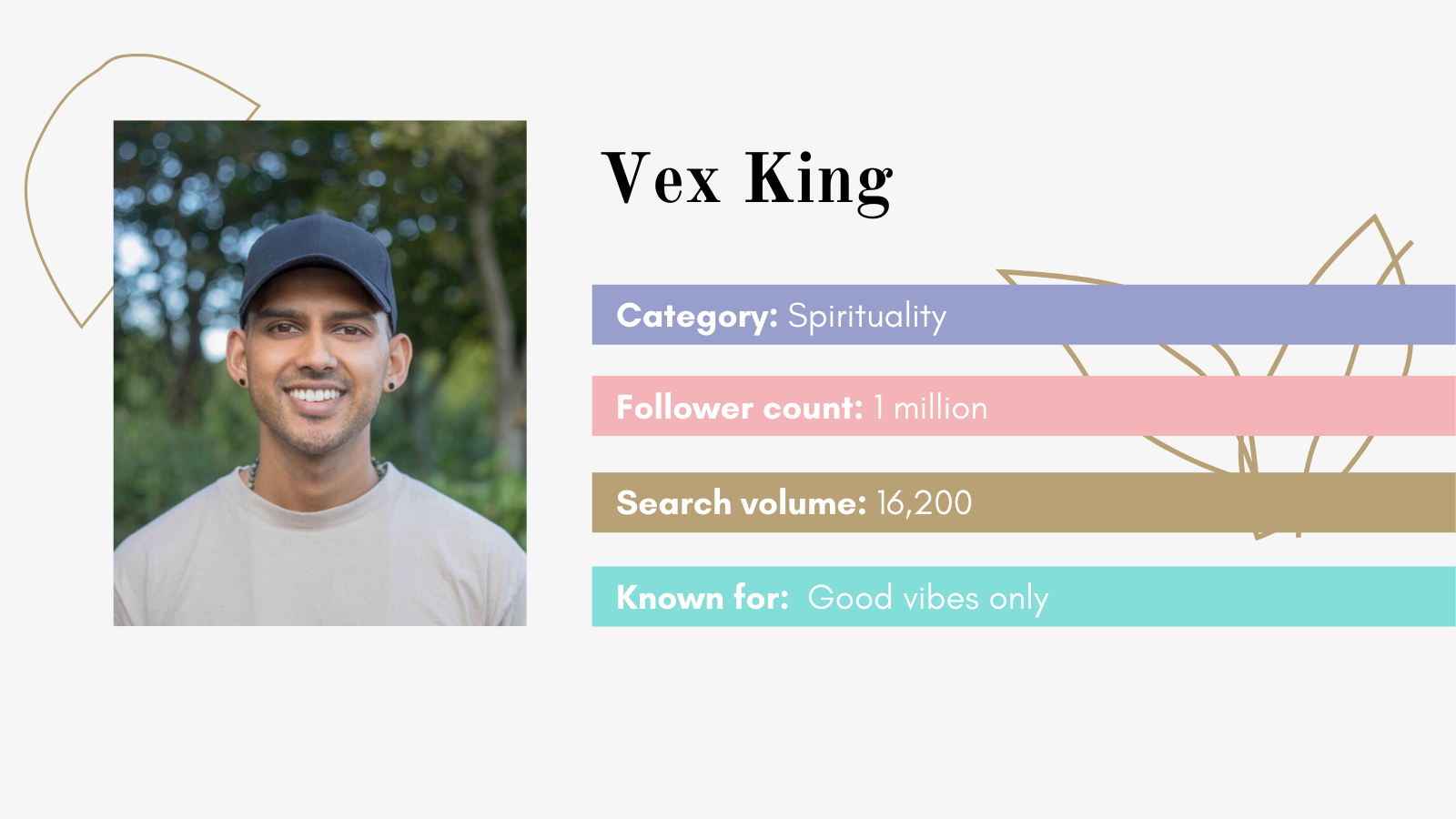 Spiritual influencers are seeing a boom within the wellness community, with accounts like Vex King boasting 1 million followers and counting.
Who is Vex King? Vex King is a mind coach who grew a social media following after popularising the hashtag #GoodVibesOnly. Vex has spoken openly about his childhood struggles with racism, homelessness and growing up after the loss of his father. Using these experiences, Vex looks to encourage others to be positive and embrace good vibes. Vex even has a ‘daily positivity routine’ and encourages people to create their own based on what works for them.

Why we love Vex King: Vex is the author of ‘Good Vibes, Good Life’ a self-improvement book, published in 2018, that shot to #1 as the Sunday Times Bestseller - and honestly, we couldn't put it down. We also can't get enough of his newest book ‘Healing Is The New High’ that came out in 2021.

It's not just big names making an impact in wellness, as these up-and-coming influencers have seen impressive follower growth in recent weeks. With a rise in people who find smaller influencers to be more reliable and trustworthy, it's no surprise to see an increased follower demand.
If you're an avid social media user, the chances are you've already heard of some of the legacy influencers in health and wellness. We have collated a list of rising influencers, seeing large increases in following, that we think are the next leading wellness influencers to watch out for. 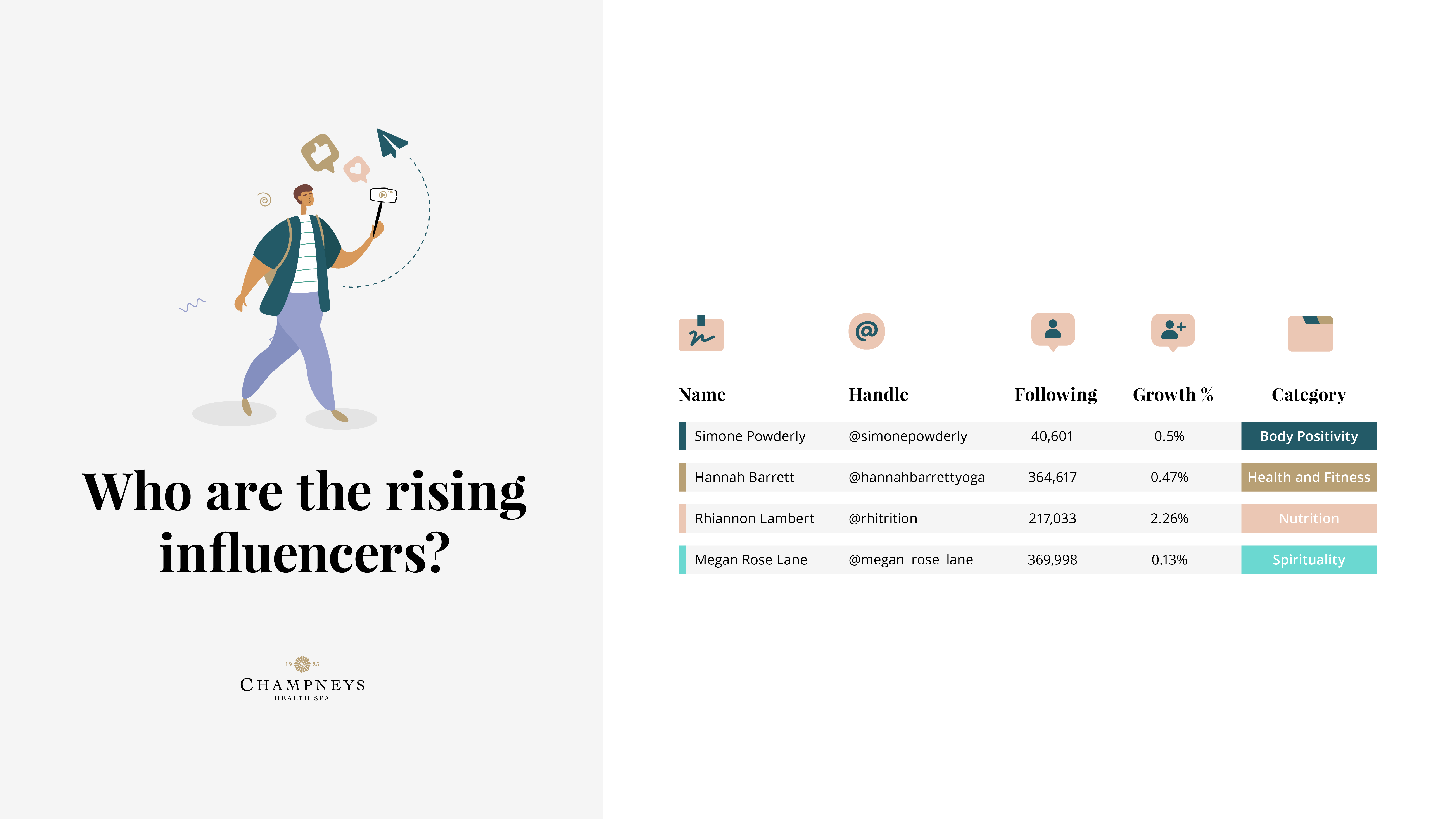 Champneys has collated a list of people we believe are the perfect group of influencers to follow to inject your feed with a fresh, new perspective on wellness. 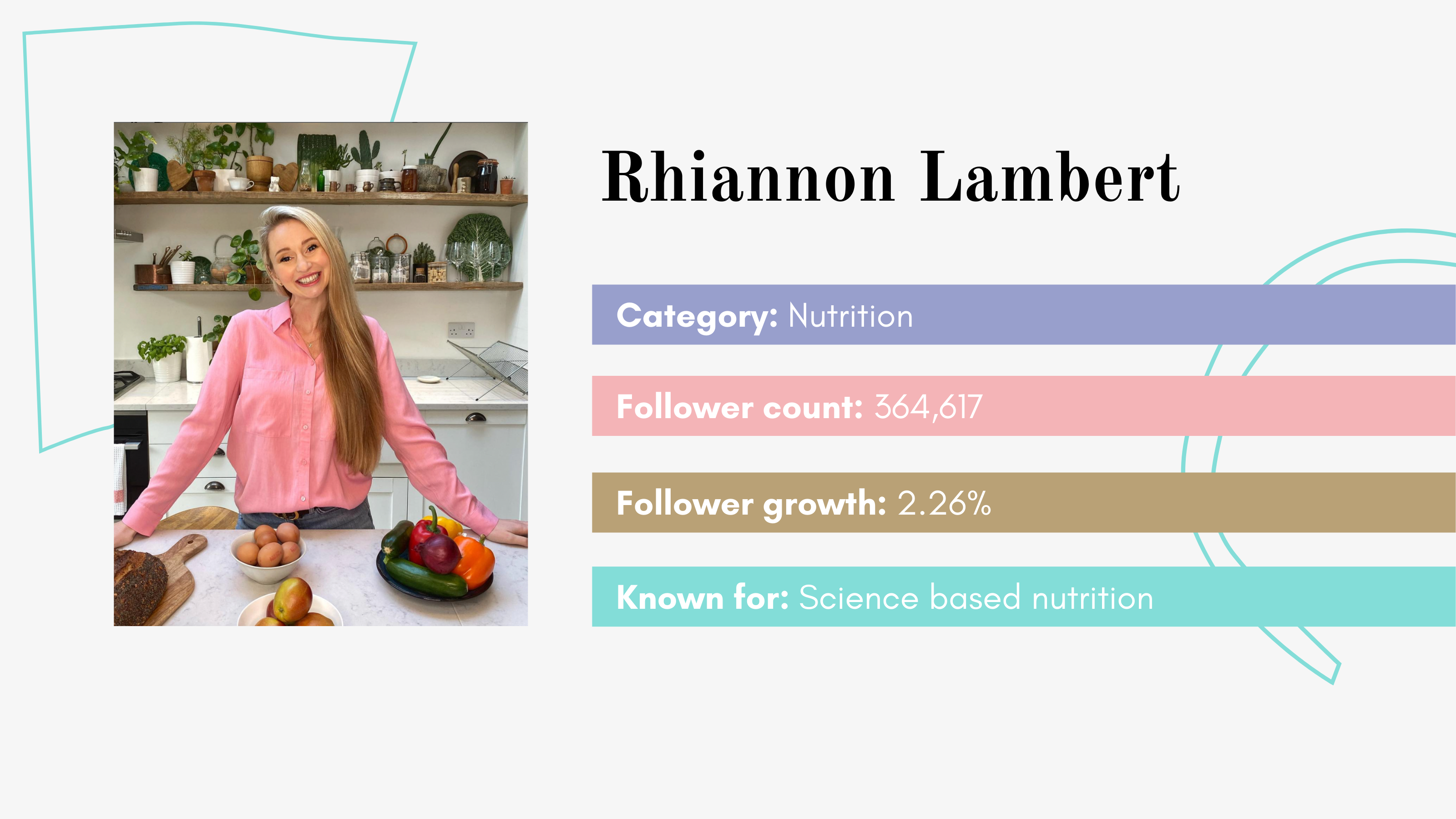 Why we love Rhiannon: Rhiannon hosts the food for thought podcast, as well as being a Sunday Times best selling author. Clearly doing something right - we love Rhiannon’s positive approach to food and cooking. 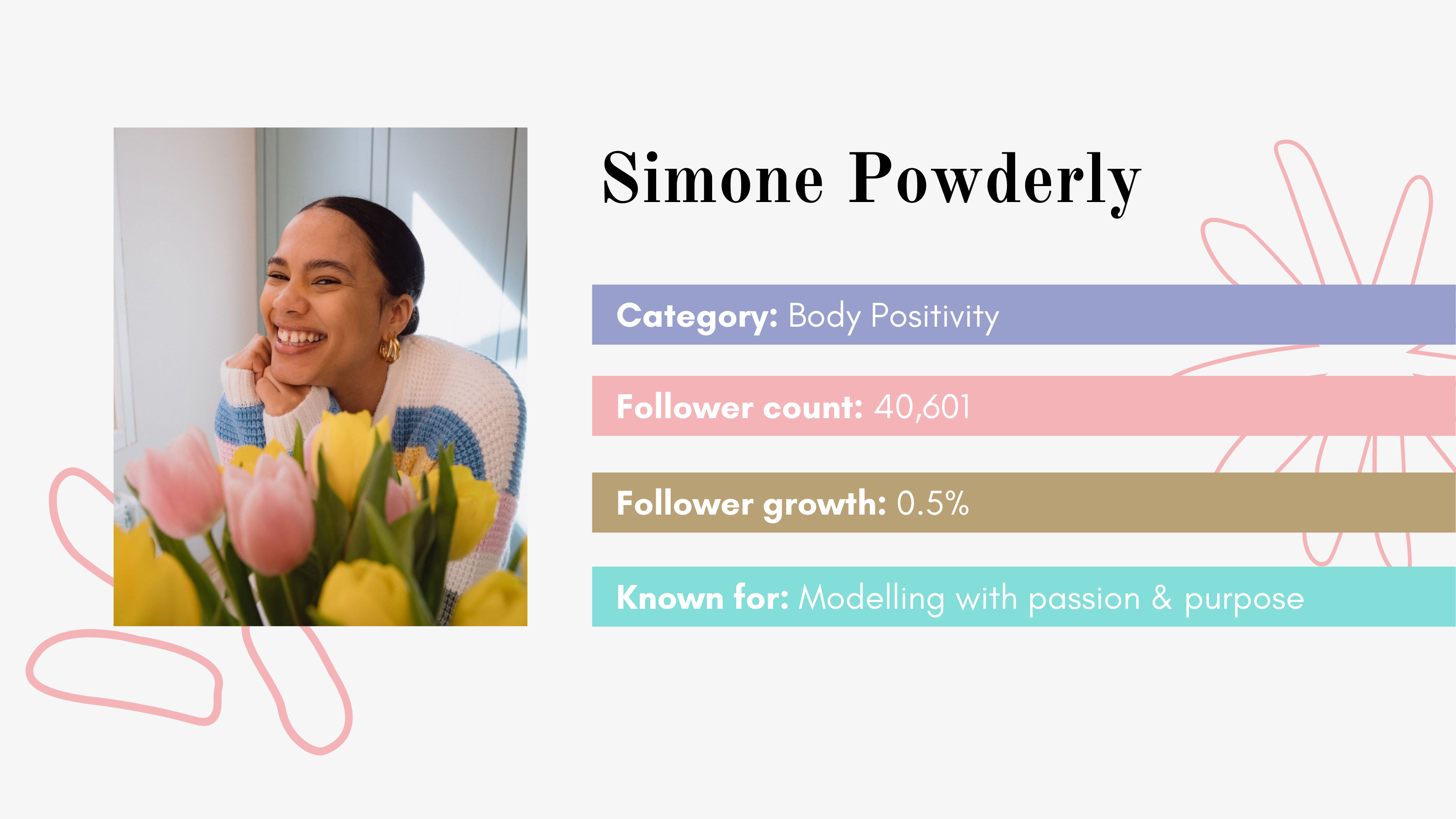 Simone Powderly tops as the rising influencer in the Body Positivity category, who despite having the smallest following has still seen impressive growth.
Who is Simone Powderly? Simone is a model helping to change beauty standards. The rising body positivity influencer looks to encourage positivity and self-love. Simone is also the co-founder of ‘The Teen Experience’ helping provide personal development workshops for teenage girls.

Why we love Simone: Simone is a successful model with self-described passion and purpose. Using her modelling career to bolster herself into a position to create positive change for others, what's not to like.

Hannah Barrett is the rising influencer for health and fitness.
Who is Hannah Barrett? Hannah’s instagram is dedicated to spreading knowledge around yoga, strength and happiness. As of 2022, Hannah has released a book ‘Yoga Happy: Simple Tools and Practices for Everyday Calm & Strength’ to help people learn about the benefits of yoga. Aimed at beginners to yoga regulars, ‘Yoga Happy’ aims to help build inner strength and resilience.

Why we love Hannah: Hannah offers a ‘no judgement’ approach to yoga, with mythbusting and education central to her content. This makes it super exciting to learn her tips and tricks in a supportive (yet fun) way. 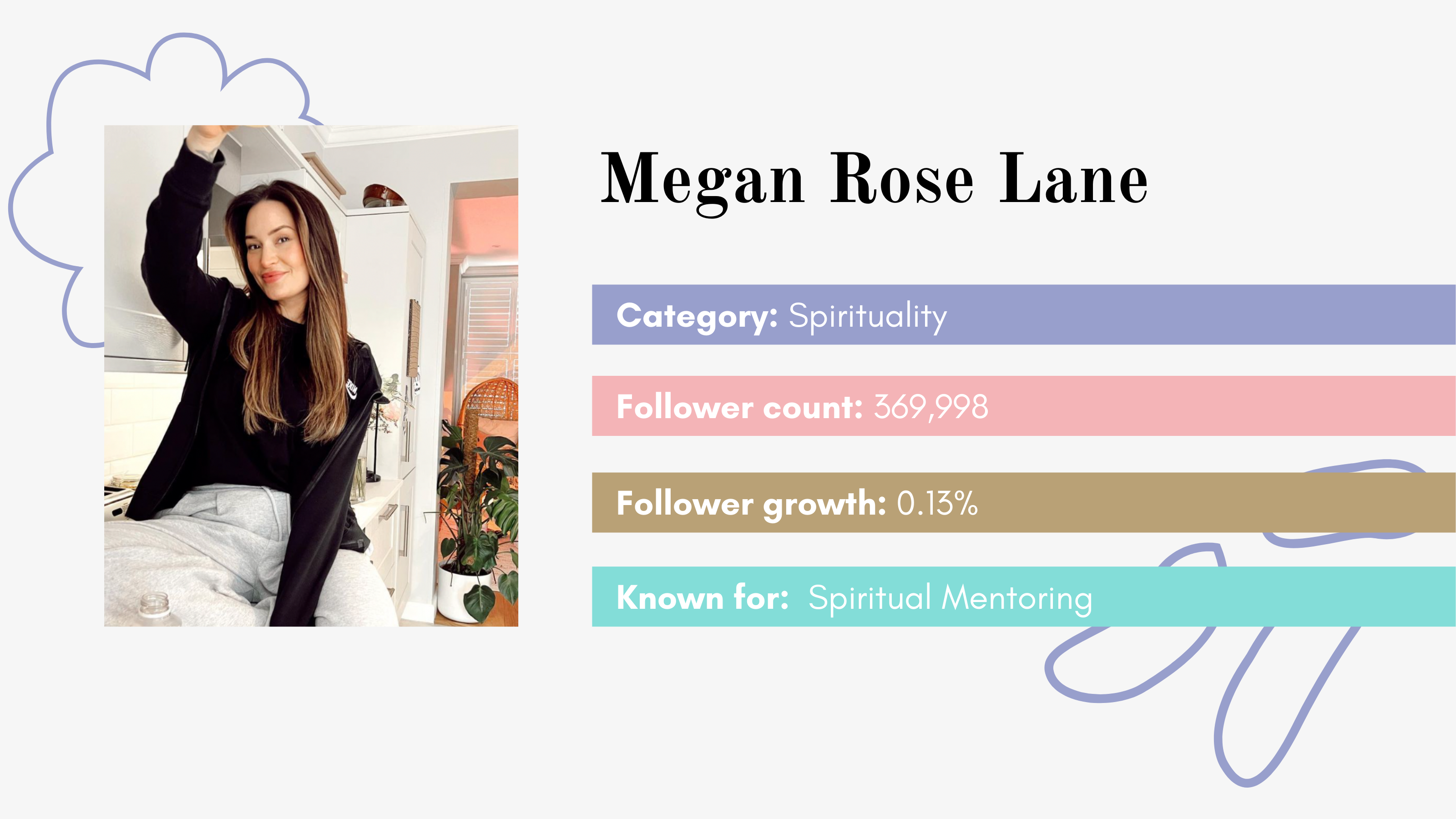 Why we love Megan: Megan has turned her obstacles into opportunities and now wants to help everyone to do the same, giving others a new lease of life.
Love them or not - wellness influencers are here to stay. Making a positive impact on the way the UK looks at mental health, nutrition and body image one post at a time.
All data correct as of 11th February 2022.